This is part 3 of my new “Deploying OpenStack on MAAS 1.9+ with Juju” series. It follows up my last post Hardware Setup: Deploying OpenStack on MAAS 1.9+ with Juju. I planned to write this post almost 2 months ago, and I know some readers were expecting it eagerly, so I apologize for the delay. We were (and still are) pretty busy working on the networking features of Juju. All of the features, presented in this series of posts are available for use, today – with the recent Juju 2.0.1 release (from ppa:juju/stable). In the past articles I explained the high-level OpenStack deployment plan and the hardware setup of the machines and switches. Now it’s time to install MAAS,configure the cluster controller and its managed subnets, spaces, and fabrics. Once that’s done, we can enlist and commission all 4 of the NUCs as nodes and deploy them via MAAS.

Since I published this article, MAAS 1.9 became the latest stable, replacing 1.8 and earlier releases. MAAS 2.0 (and even 2.1 )is out now, and it comes with a new not-quite-backwards-compatible API 2.0. Juju 2.0.1 released less than a week ago, is the only version on Juju to support MAAS 2.0+. So the setup below assumes MAAS 1.9, but information specific to MAAS 2.0 or Juju 2.0 will be highlighted in green.

Setting up MAAS 1.9+ for Deploying OpenStack with Juju

There are 2 main ways to install MAAS on Ubuntu (14.04 Trusty Tahr or later): Using the “Multiple Server install with MAAS” boot option from the Ubuntu Server installer media, or by installing a few packages with apt-get inside an existing Ubuntu installation. MAAS 2.0 on the other hand requires at least Ubuntu 16.04 (Xenial Xerus). Both options are well described, step-by-step with screenshots in the official MAAS documentation. There’s a slight wrinkle there though – the described steps apply for the latest stable version of MAAS available for trusty (or xenial), which supports the advanced 1.9+ network modelling. Fortunately, the installation steps are almost the same as the nice one-pager “MAAS | Get Started”, so I’ll just list them briefly below.

MAAS UI may complain there are no boot images imported yet, but that’s fine – we’ll get to that once we need to add the NUCs as nodes.

Now we have MAAS up and running and it’s time to configure the manged cluster controller (a.k.a. rack controller in MAAS 2.0) interfaces before we continue with the rest (zones, fabrics, spaces, subnets). Either from the web UI (as outlined in the Get Started quick guide) or from the CLI, we need to update all cluster controller interfaces so that eth1 and all VLAN NICs on it are managed for DNS and DHCP, have default gateway and both DHCP and static ranges set. Here’s a screenshot of how it looks like after we’re done (for MAAS 1.9 on trusty): 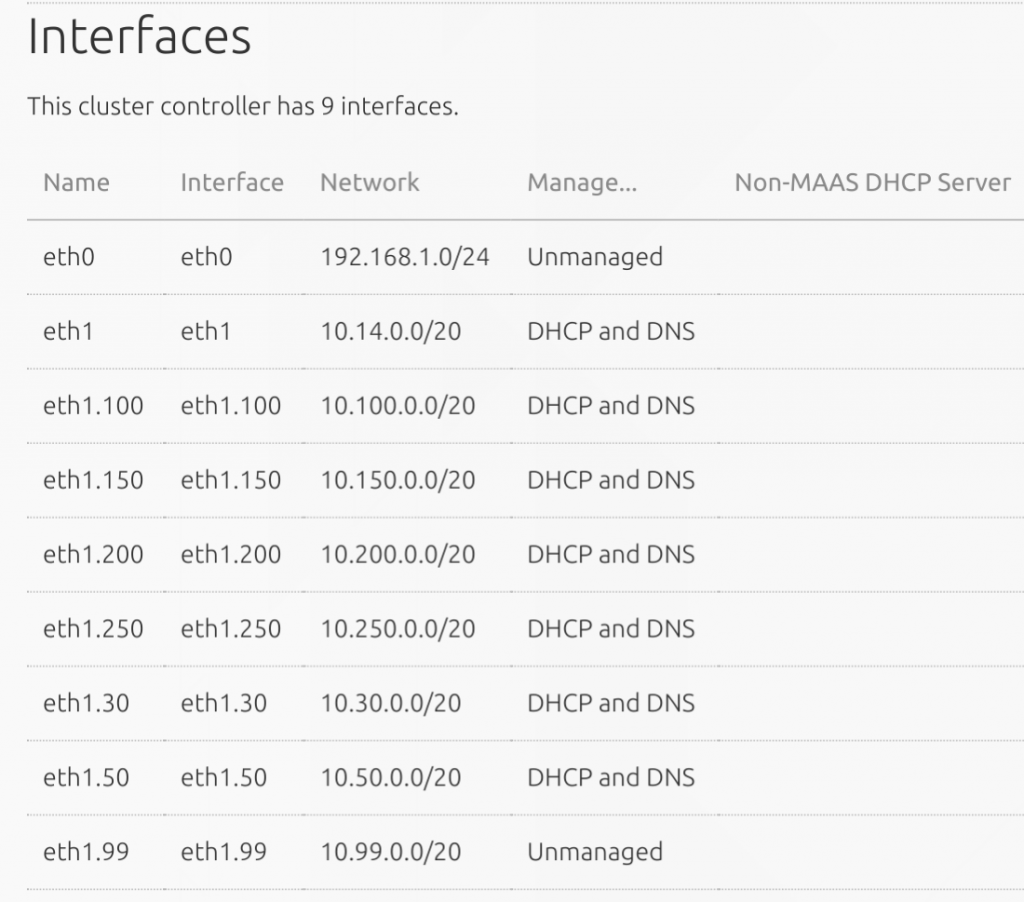 In MAAS 2.0 the same information can be found in the Nodes page -> Controllers (1) , clicking on the only controller and checking the similar Interfaces section at the bottom of the page.

To achieve this using the CLI, run the following commands:

Next step is to set up 2 MAAS fabrics: I’ve chosen “maas-external” (containing the external 192.168.1.1/24 subnet for eth0) and “maas-management” (containing everything else). By default MAAS creates one fabric per physical NIC it discovers in /etc/network/interfaces during installation. So at this point you should have fabric-0 containing an “untagged” VLAN and the external subnet linked to eth0 (192.168.1.0/24) and fabric-1, which also contains an”untagged” VLAN and as many “tagged” VLANs as discovered from the /etc/network/interfaces.

NOTE: MAAS 2.0 CLI commands for fabrics, spaces, VLANs, and subnets are identical (only the profile name should differ – e.g. 19-root vs 20-root).

should give you output like this http://paste.ubuntu.com/14568771/. This is almost what we need, but let’s change the names of the fabrics to reflect their intended usage:

You might have noticed MAAS created a default space called space-0 and all subnets are part of it, as you can see the Subnets page in the UI or by running:

This space-0 will be used when no explicit space is specified for any (new) subnet. We’ll rename it to “default” and also create all the other spaces we need for deploying OpenStack:

Now we can update all subnets to set meaningful names and a default gateway for each and also to associate them with the correct spaces. To do that we need to use the MAAS IDs for spaces, same for subnets, but fortunately there’s a neat trick we can use here: prefixed references – e.g. instead of "2" (a subnet ID) use "vlan:50" (i.e. the subnet in VLAN with ID 50 – if there is more than one subnet in VLAN 50, it won’t work as it won’t uniquely identify a single subnet). Another prefixed reference for subnets is for example "cidr:192.168.1.0/24" to select the unmanaged external subnet. We still need the space IDs, so we’ll first list them all and then copy their IDs in the subsequent commands to update each subnet. If we created the spaces in the order given above, they will have increasing IDs starting from 2, so that’s makes it slightly easier.

NOTE:  These steps assume you’ve pre-populated the /etc/network/interfaces/ of the rack controller as suggested earlier, so the fabrics, VLANs and subnets are auto-detected and created by MAAS. We only need to set up DHCP for the managed subnets.

After those commands your Subnets page in the MAAS UI should look like the following screenshot (in MAAS 1.9, for MAAS 2.0 look at the Networks page for the same information, albeit displayed slightly differently):

Importing Boot Images and Next Steps

Alternatively, with the CLI you can run (same command for both MAAS 1.9 and MAAS 2.0):

No need to change the boot images selections as by default 14.04/amd64 is selected (in MAAS 1.9, the default is 16.04 in MAAS 2.0). You can watch as the UI auto-updates during the 2 phases – region and cluster import. When done the UI should look like this (NOTE: at the time of writing, 16.04 LTS was not yet out, so the screenshot is somewhat outdated):

I’ll stop here as the post again got too long, so if you’re still following – thanks! – and stay tuned for the next post in which I’ll describe adding the nodes to MAAS, including the Intel AMT power parameters needed by MAAS to power the nodes on and off, as well as how the node network interfaces should be configured to deploy OpenStack on them.

I’d like to thank my readers for the encouragement to continue doing these posts and for the feedback. A few mistakes in the original version of the post were fixed – Thanks Toto!

Convenient links to all articles in the series:

35 Comments on “MAAS Setup: Deploying OpenStack on MAAS 1.9+ with Juju”

This site uses Akismet to reduce spam. Learn how your comment data is processed.